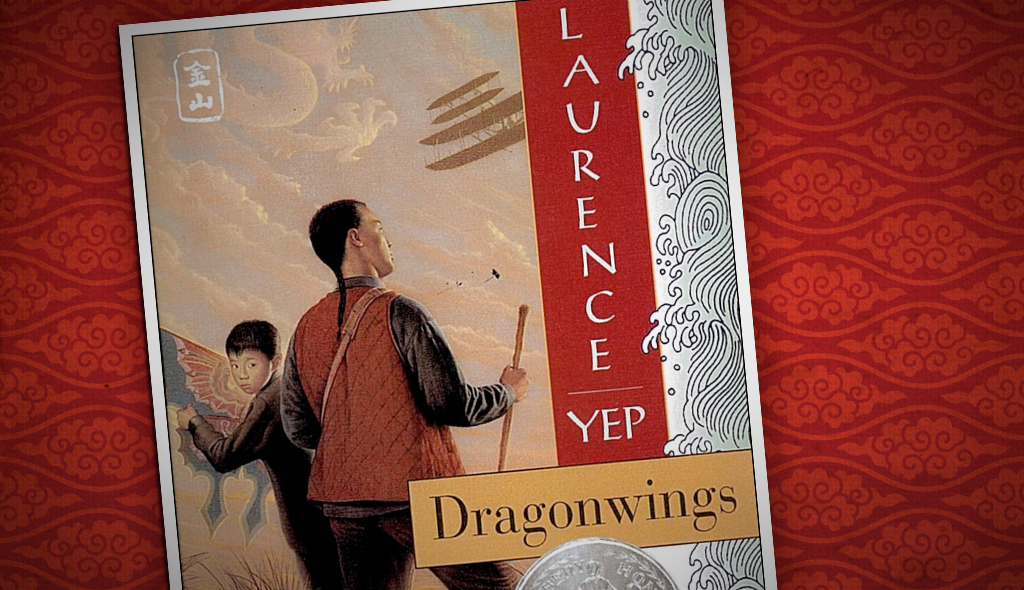 Based upon a true story, Dragonwings is the tale of a dreamer – a lowly Chinese laundryman named Windrider
who is living in San Francisco at the dawn of the new, modern age. Windrider has an intuitive gift for all things
mechanical and can repair all of the newfangled machines of his time. But his real talent is his imagination. Inspired
by a vivid recurring vision of a dragon in flight, Windrider believes that he can fly. And despite all the obstacles that
are thrown in his path as the 20th Century begins, he is put to the test and vows to build his own airplane and take to
the skies.
Now such a deed requires help and support so Windrider asks Pearl, his wife in China, to send their only son to
America. Moon Shadow has never met his father but he eagerly undertakes the difficult journey because he has
heard stories of the land of the Golden Mountain and all of the riches that await. But once he arrives in America,
Moon Shadow must face the reality of a hostile turn-of-the-century American city – a strange new land with strange
new people including the stranger who is his father.
For his part, Windrider is far more comfortable with a wrench in his hand than holding the hand of an
adventurous boy like Moon Shadow; but he is determined to master fatherhood just as he has mastered the new
technology of motor cars. And, despite their natural misunderstandings father and son have the developing vision of
their airplane and of achieving human flight as a common bond. Their faith is more than just a belief in mechanical
innovation. Their faith is a belief in the power of imagination itself – that gift and ability lying within each of us to
grasp with the mind and heart what we cannot grasp with the hand alone.
Father and son carry on their quest despite enduring the doubts of their friends and the racial prejudice of the
era, the violence of Chinese and American gangs and even the 1906 earthquake along with the great fire that destroys
most of San Francisco. Along the way they reawaken the long-buried dreams of similar restless souls including their
fellow laundry workers who must overcome their own suspicions about America and Americans, their secret
employer Mr. Alger who is lost in regret, their landlady Mrs. Whitlaw who is captive to her sad memories and her
niece Robin who is trapped in her own cynical armor. Each of these people has a special contribution to make to the
airplane and a special reason for doing so. And in helping Windrider and Moon Shadow build the airplane, each of
these friends begins building a new, richer life for themselves. It is as if each in his or her own way is like a dragon
that has woken from a long slumber.
Only with this collective effort can Windrider and Moon Shadow survive the many natural and man-made
disasters that challenge their dream. Only united can they all lift themselves up from defeat after defeat and at last
pull the airplane named Dragonwings up to the hilltop where destiny awaits. And now this band of unlikely
companions stand together as the propellers begin to spin and Dragonwings points hungrily at the sky yearning for
freedom – its fragile wings bearing the hopes and dreams of the proud Chinese aviator, his adventurous son and all
of their friends.
The True Impact of Dragonwings
The movie, Dragonwings, based on this award-winning story, will be a bridge to understanding the yearnings of
adventurers for new challenges, new vistas and new opportunities. It will put in context the relationship of Chinese
immigrants to America, and offer an historical understanding of the enduring bonds of these two nations.
In an era when Americans and Chinese need to appreciate how their histories as people are intertwined and their
destinies in the 21st century have more in common than in discord, Dragonwings offers a glistening insight into a
past that is ever part of the future.
With an international cast worthy of this inspiring, epic adventure, with a world-renown director and acclaimed
cinema artists in the fields of writing, photography, special effects and set and costume design, and with a setting in
pre-modern China and America, Dragonwings will reach a world audience of young and old alike. It will be a tale
retold by parents to children in the present era and the future, linking the bonds of family, culture and personal
accomplishment. It is the tale of Chinese-American roots and the sturdy offshoots of those nurtured seeds.

The Lone Star Lion story follows a young teenager living with Fetal Alcohol Syndrome as he navigates a life ...